Those couples buying houses in some states find racial covenants in real estate still exist to this day. No matter how beautiful sales brochures seem the property may well hide a dark past. A purchaser may not even be aware of the covenants until they commit to the purchase by signing the documents.  It is a sad statement on society 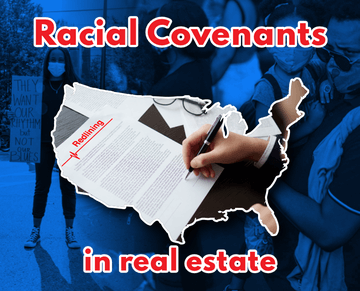 that Racist housing policies prevail to this day. That these property records contain racially restrictive covenants is an ongoing reminder of systemic racism for minority homeowners.  Sacramento County has worked tirelessly to right the wrongs but there still remains an uphill paperwork trail. Furthermore these racist real estate covenants ruled unconstitutional more than seventy years ago. Yet the Jim Crow esque language still soils Californian property records. A number of Democratic lawmakers now want to create a system that actively removes this harmful language.

The first part of the 20th century saw racial covenants widely used. They belonged to a racist ideal or system known as redlining which affected Asian-Americans and African-Americans. Along with other ethnic minority groups redlining was a way to restrict access to certain neighbourhoods. However while home owners can modify property records under current state law it is only with a strike through. Sacramento County officials report around five applications for modifications each year. This number would seem to be disproportionately low considering the amount of housing transactions within Sacramento. Are those purchasing real estate fully aware of the covenants, can purchasers be better educated. Legislation isn’t new as prior legislation died over 10 years ago, however today a more determined mindset battles racial inequality. Should Caucasians be playing a more active role and joining together against this injustice.

The fact that neighbourhood redlining from the 50’s still persists is a sad indictment. While lethargy prevailed so has the stigma of redlining and moreover the defining of disadvantaged neighbourhoods. Those neighbourhoods deprived of opportunity, in turn, gives way to poor education standards and a disaffected youth culture. The cycle continues as the majority of the community are upwardly mobile while those of colour struggle to prosper. A neighborhood that is disenfranchised will find very little room for upward momentum. The current arrangement relies on a pack and the applicant to strike out offending references. A notary will then witness and sign the forms at the applicant’s cost. No fees are charged by Sacramento County in accordance with legislation from 2005 that addressed racial covenants. However why the process has not become automated some 70 years on raises uncomfortable questions.

A Los Angeles Democrat in 2009 put forward a bill for a statewide system to remove racial covenants. The restrictive covenant put to rights as a property transaction completed or the property transferred. The bill approved by the legislature irrespective a similar proposal was voted down the previous year. Governor Schwarzenegger vetoed adding “the practical legal effect is negligible”. Lawmakers who support the renewed effort suggest there is, more than ever, a greater weight of momentum.