The decision of a probate judge in Alabama has opened the door for the potential father to litigate (wrongful death) against the abortion clinic. The expectant father wanted the child but could do nothing to change his partner’s mind. 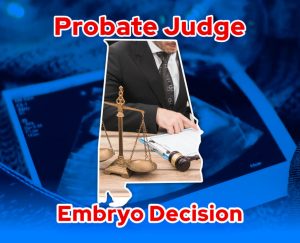 In early February a lawsuit was filed against the abortion clinic (Alabama Women’s Center) together with the manufacturer of the abortion pill used.  However Alabama law prohibits family members, of the deceased, from bringing a wrongful death claim. The action only brought by a personal representative of the deceased estate.

The probate judge has conferred  ‘legal representative’ rights of the aborted embryo. The would be father along with his lawyers are now referring to the aborted embryo as “baby Roe”. As the representative of the embryo he can now proceed against those involved in the termination of the pregnancy. It is worth noting that Oregon and West Virginia also voted on new abortion laws. The attorney of the father did acknowledge it may be the first estate to open for an embryo/fetus. The action raises concerns amongst women’s rights and pro abortion campaigners.

The further ramifications are that if the case is successful it questions whether the process of IVF will be undermined. Given the embryo forms as per any treatment (assisted reproductive technology). Physicians and consultants are also in a dilemma having undertaken an oath to their patients, that being to safeguard privacy, dignity, autonomy and welfare while assisting them in health and wellness decisions .

The decision by the probate judge would seem to be a landmark decision following Amendment 2 (“personhood law”). The amendment passed within the midterm election of last year. The amendment, in effect, gives both the fetus and mother parity under State law. Therefore constitutional rights by way of the amendment for fetuses and fertilized eggs are provided for. What’s also declared is that there are no legal rights, under Alabama constitution, to an abortion. The amendment saw support of almost 59% amongst electors in the midterm. Notably there are no exceptions for cases of incest, rape, or if the mother’s life is at risk.

In 2014 the interest of an unborn child came in to focus. Minors who sought an abortion would require court permission along with a corresponding trial i.e. the fetus to have legal representation. The law struck out in 2017 by a Federal judge on it being unconstitutional. In the majority of states the lawsuit may not see the light of day. In 1976 the U.S. Supreme Court ruled spousal notification provisions unconstitutional. In this case (Planned Parenthood v. Danforth ) the state was Missouri and specifically within the first 12 weeks of pregnancy the consent of a spouse may not be constitutionally required as a condition of abortion. Another case in 1992 (Planned Parenthood v. Casey) saw the court rule that the Pennsylvania statute provision that required a woman to advise her husband or partner prior to abortion served as a substantial obstacle and undue burden to the woman.

Abortion Cost financially prohibitive to many

The reasoning laid out by the court (Casey) stated that a spousal notice requirement potentially compromised further abuse victims (both women and children) while allowing the husband to nullify a wife’s decision. Those women that fear the consequences of notification are those in the most danger. The veto previously found unconstitutional in the Danforth case. To prevent the wife aborting the use of economic coercion, physical force or psychological pressure cited. Does the ruling by the Alabama probate judge therefore set a dangerous precedent. Might the amendment become a “trigger law” meaning if Roe v Wade was overturned it may bring about an outright ban on abortion and/or substantially undermine those principles. The U.S. Supreme Court’s rejection the idea that, in the case of Roe, a fetus is a person.

West Virginia had also passed a ballot measure/proposal to restrict access to abortion. Amendment 1 seeks to criminalize abortion along with the loss of protection for women to a federal right to an abortion. The amendment will also remove state funding through Medicaid. Abortion cost is financially prohibitive for many and the removal of access to funding will disproportionately affect the disadvantaged. Many may well see this as discriminatory and targeting minorities, means to insurance coverage and those on lower incomes, should not abortion be recognised within the wider remit of health care? A similar ballot measure was voted for in Oregon but was voted down by a substantial margin. The ballot sought to end the funding of abortion by the State unless medically necessary.