Following the death of Dominic Domingo (82) the State Office of The Medical Investigator oversaw a deputy field investigator to investigate (March 9 2017). That person was Pamela Smith and thereafter she appointed 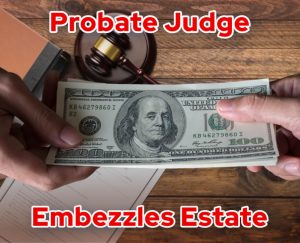 her husband as special administrator to Domingo’s estate while in her probate judge capacity (Sierra County). Her husband (Randy Smith) then misappropriated almost $300,000 while aware there were “living heirs entitled to the estate”. Recorded by the State Attorney General’s Office (criminal complaints). Criminal charges following on from her resignation (probate judge) in lieu of ongoing proceedings by the Judicial Standards Commission. A spokesperson was unable to comment on Smith’s employment status due to the ongoing. The complaint alleges probate records were unlawfully altered by Pamela Smith. Consequently in order that her husband had access to the deceased man’s bank account. The money used for debts, mortgage and to subsidize Mr Smith’s boat repair business.

It is unclear who their representative is in the proceedings but as a probate judge Smith had a “fiduciary responsibility” to preside over the estate in an orderly fashion. However while in office as a probate judge, Pamela Smith committed criminal acts of willful misconduct. A further two  statements put forward by the probate judge also appear to contradict in that firstly she stated City of Truth or Consequences police advised no next of kin. Conversely the chief (recorded interview) confirmed there were family living in New York. Secondly, she claimed a similar response from Domingo’s pension fund administrator, however again they confirmed they had sent a message of condolence to Dominic’s nephew and sister. The nephew also confirming that he personally met Randy Smith at the time he made repairs to his uncle’s car. This is truly an abuse of power on a breathtaking scale.

It would also appear that Pamela and Randy Smith offered the nephew (Joseph Paone ) a settlement, by way of pay off, for $192,000. This offered via an investigator who the Smith’s had hired. The nephew made it clear that this was much less than the amount taken from the uncle’s account. The family became aware of Domingo’s death from the pension administrator. The charges against Pamela Smith include tampering with public records, fraud, forgery, conspiracy and money laundering as well as personal financial gain while in an official capacity as probate judge. Randy Smith while complicit with Pamela Smith charged with conspiracy, money laundering and fraud. A civil suit also filed against OMI, Pamela and Randy Smith, the state of New Mexico and  the Sierra County Board of Commissioners. The nephew would also like the remains of his uncle returned to him.

Whether other families have been targeted is not known. The Attorney General’s office has undertaken to investigate the work history of Pamela Smith. While this is positive questions remain over the Judicial Standards Commission and why disciplinary proceedings won’t run their course against such serious violations of public trust. How the New Mexico probate court system functions is also under scrutiny. A probate judge is not required to be an attorney under State law and the lower courts have less accountability. Previously a constitutional amendment would have allowed New Mexico counties the option of a dedicated probate court. Allowing district judges to preside over caseloads but fell flat before a vote could be taken. This case must encourage lawmakers to reconsider why unscrupulous individuals are in this position. Seemingly entitled to abuse office and ransack estates. Will the burden fall on tax payers.

What Is a Probate Judge and what is their remit?

Contested estate issues:
Both a State judicial official and a civil court judge are responsible for every aspect of the probate court system. A probate judge can decide over ‘competency’ issues and a deceased estate. In some counties there are surrogate’s courts. Irrespective of whether there is a surrogate or probate court responsibilities are much the same. However much depends on whether a last will and testament is present or whether the deceased died intestate (no will). A probate judge’s duties vary and this often depends on whether the deceased personal representative together with the heirs at law and beneficiaries enjoy a harmonious relationship. Areas of conflict must also be dealt with such as whether anyone is contesting the will (testate matters) and/or whether a close relative (heir at law) would lawfully inherit under intestate rules (without a will).

A probate judge should seek to select/appoint a personal representative with intestate estates. A personal representative assumes the same responsibilities as an executor (testate). However the probate judge makes the decision over appointment as the deceased did not expressly name anyone. Legislative statutes in some states can restrict probate judges in respect of appointing personal representatives. A surviving spouse has a right first and foremost and thereafter adult children. A surviving spouse however may well have competency issues and/or may not want the responsibility. Along with the commitment at a time of bereavement. If everyone is in agreement the probate judge simply appoints the individual. Asides from this the judge would play a minimal role and assuming all involved get along would be signing orders as the estate moves forward as per a testate scenario.