A probate court clerk has been found guilty of a $300,000 theft from The Chambers County Probate Court, 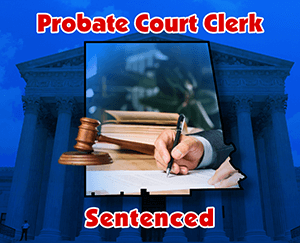 using her official position for personal gain. The Probate Court Clerk (Rene Welch (57)) violated Alabama’s ethics law and found guilty on August 12th. The Chambers County Circuit Court sentenced her to 10 years in prison. However the sentence split with an 18 month custodial sentence followed by a 5 year probation period. The court also ordered Welch to make good full restitution but court records confirm that, at the time of plea, the court was not in receipt of any sum. As per the plea agreement $299.861.68 of Court money unaccounted for between July 2013 and December 2017. The theft came to light last November following a report from the Alabama Department of Examiners of Public Accounts.

The charge against Welch was initially theft of property first degree. This later changed to a Class B felony ‘intentionally using an official position or office for personal gain’. A letter sent to the probate court clerk re: reparation. Following a meeting with the examiners’ office she failed to show good cause as to why the charges shouldn’t stand. Her petition to not pay charges were denied. Welch worked for former Judge Brandy Easlick of the Chambers County Probate Court. The report around the court clerk made public prior to the general election for the position of probate judge. The election between Judge Easlick and Paul Story (who later won). A statement by Easlick confirmed the probate office worked for almost a year with the examiner’s office before the release of the report.

The report detailed how money functions (duty) on a day to day basis along with the book keeper’s responsibilities. The book keeper has to verify amounts daily and any discrepancies made good. The probate court clerk would then prepares the money collected throughout the day and deposits with the bank. Numerous instances of cash recorded (deposit slip) yet short against clerks cash collection and book keeper verified.

The annual average salary for a court clerk in 2017 was $41,100 as confirmed by The Bureau of Labor Statistics. However clerks working in State government on average tend to earn more at around $44,550. The profession is predicted to grow through to 2026 with a 6.4% growth rate nationally. While court clerks may not see many new judicial openings and/or job growth there will be openings for existing posts due to employees leaving their positions for retirement and other reasons. In a competitive work environment court clerks with applicable experience and degrees will most likely have an edge when it comes to hiring.