For months now Cities state wide have been bracing themselves as new police records laws are rolled out. That being SB 1421 and AB748 and the associated costs and man hours in fulfilment and compliance. 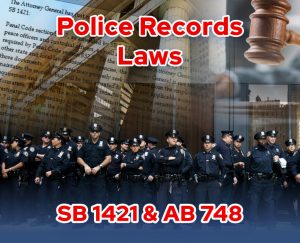 These changes bring to an end decades of secrecy and non disclosure in respect of personnel police files. The new laws mandate that agencies make available videos and investigating records where the use of force and shootings result in serious bodily harm. The new police records laws also require case records of police misconduct. Where officers have behaved dishonestly and/or a sexual assault has taken place. An estimated $250,000 annually anticipated in order to comply with the new laws. Fremont Officials advise, as they prepare to release thirteen incidents (shootings and misconduct), this will take 1,268 hours to prepare.

Support for the new policies has been indifferent. Fremont maintains that “critical incidents” (death or serious injury) are unavailable under The Public Records Act as they are classified as evidence, this policy now being overturned by AB 748. City staff analysis confirm the need for substantial sums solely to process police shootings (videos) and additional incidents. The costs are inclusive redacting confidential information and will require hiring in new staff who will also have to review videos. The costs for compliance with SB 1421 would seem even more onerous owing to the expansive requirements. The revised criteria now takes in additional investigative files as well as being available for public scrutiny. A redaction of Information to include financial and medical information, home address details, along with officers cleared of any misconduct.

Before implementation of the new police records laws the potential impacts came under scrutiny (2017). A total of 8 complaints (sustained) and 5 incidents of ‘use of force’ resulting in great bodily injury or death. Definition of great bodily injury by force is the same as that used by the State Department of Justice. In order to review the 13 recordings of these incidents and make public the information will require around 78 hours by the chief of police. The same amount of time by a Captain. To review the same videos a deputy city attorney will require 233 hours. Analysis also confirmed that 10 city staff will be required to work a total of 1,268 hours. An increase in staffing anticipated across the Bay area. A review of software, in Richmond, to automate redacting of records is ongoing, this potentially saving substantial staff time.

Another compliance option for the new police records laws is body cameras for jail guards and police. The reasoning behind the potential $3.9 million spend on an Axon contract by The San Mateo County Sheriff’s office is that the Axon cameras together with Evidence (.com) software allows for the redaction of videos to be far less labor intensive. The San Diego County Sheriff’s Department advise a potential cost of $354,524.22 to cover redaction and review of records of 48 cases (use of force). The cost for an additional 28 cases is still under review.

The department has put forward a case ( under section 6253.9(b)(2)) which permits the agency to charge for the enquiry. The department will look to charge for the costs incurred inclusive the employees salary noting this as $33.80 hourly. However the court case identified by The San Diego Department is currently under review. (California Supreme Court). Therefore this case currently is not a citable precedent. In January a quote to KPBS of a fee of around $40,215.83 for redacted records. These records refer to 3 sustained cases of sexual assault and eleven sustained cases of dishonest behavior by a  deputy. The costs breakdown detail work for each case, that being copying paper records and redacting information from electronic files (audio and video).