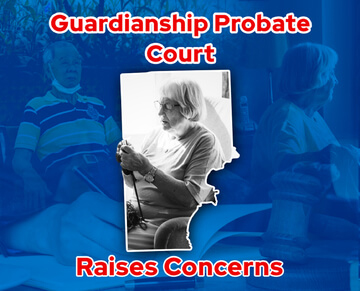 has seen the State Supreme Court and the Attorney General take action. The appointment of the guardianship company by The Macomb County Judge (Kathryn George). The family have had contact by the lawyer acting for ‘Caring Hearts Michigan’. They confirm they are also dropping a restraining order they had initiated against the family. The family went to court in November 2018 for guardianship. The daughter had previously, and what would be routine for a family member, sought the guardianship probate court direction.

Both the parents (Father and step-mom) are suffering from dementia. The law states the daughter is a “priority” under guardianship probate court. However the judge had different views and expressed concerns over her parents and directed Caring Hearts Michigan as guardian and conservator instead. The daughter confirms that while in court she felt extremely intimidated. Thereafter the parent’s round the clock caregivers a company called Executive Care owned by a Cathy Kirk. Coincidentally who also owns Caring Hearts Michigan i.e. she hired her own company. Court policy is unequivocal in that a business relationship must be apparent  and that the law does not provide for profit or enrichment in such a way. Guardians can, of course, charge for their time and services but the arrangement and how it has come about raises questions. In essence a self selected service provider, remunerated as the service provider and guardian.

Guardianship probate court there to protect not abuse

Following further investigation by 7 Action News a number of further issues came to light. The restraining order against the family was by Michael C Taylor who was the attorney acting for Caring Hearts Michigan. Mr Taylor is the mayor of Sterling Heights and works for the law firm belonging to Robert Kirk (Cathy Kirk’s husband). Mr Kirk works in the probate courts (Macomb County) as a Public Administrator. In a joint statement On Friday Macomb County Circuit and Probate courts Chief Judge James Biernat Jr. Together with Michigan Supreme Court Chief Justice Bridget McCormack confirmed that Michigan residents must have confidence in the probate court.  and that individual rights are being protected. That’s why the Michigan Supreme Court is working with the Attorney General on the Elder Abuse Task Force to address concerns raised over the guardianship probate court system.

The Attorney General commended for the action taken to date regarding Probate Judge Kathryn George. The full powers of the attorney’s office will be exercised to ensure proper and robust procedures are in place and family’s rights are the priority along with the treatment of vulnerable adults. Though interesting to note that Caring Hearts Michigan blames their resignation on “disruption from family members”. The case to be heard later this month without Judge Kathryn George present.
Michigan Guardianship forms
Report Guardianship abuse