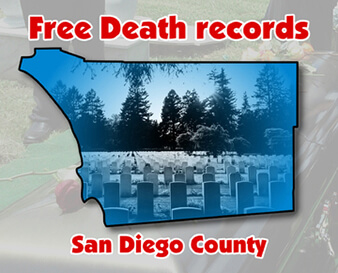 San Diego County. The period covered is from 1997 to 2018 (third quarter). This will be by virtue of an online portal database of searchable free death records. There will be more than 59,000 free death records available. These records provide valuable insights and comparable data (along with conclusions) in to circumstance and types of unexpected deaths in San Diego along with changes through time.

The Chief Medical Examiner sees the information gleaned from the deaths as invaluable to assist the living. Therefore hopefully to change lives for the good, a vision for a “data forward agency”. The premise is that the information is utilised by the media, public and various agencies that have a degree of ‘overlap’ with the subjects within the report. The data is also there for research and thereafter to provide invaluable insights back to the Medical Examiner.

Not all deaths in San Diego County are within the remit of the Medical Examiner. The Medical Examiner sees reports of some 40% of deaths and those bought in for examination total in excess of 3,000. The various criteria as to when the Medical examiner intervenes is suicides, homicides, accidental deaths and deaths in custody. Along with any unexpected or sudden natural death in which the deceased was not in contact (within the last 20 days of their life) with their health care provider. Those cases of special interest are those of public safety and public health.

The free death records also offer the comparison with other national, state and regional stats and arguably relevant as the crime statistics of any jurisdiction. The data confers important information in respect of a barometer of the community. The free death records can illustrate trends and patterns which can be compared with the wider population. The data can also considerably assist with care in the community. The Medical Examiner’s Department determined and committed over the past several years in making the free death records available. Mindful that there are 2342 separate death “systems” (investigation) which serve 3137 Counties.

Other jurisdictions were studied in order to ensure the portal was responsive, intuitive and could be navigated with ease. In line with GDPR the details of the deceased along with the immediate family are withheld together with case numbers, date of birth and addresses. There are some pre assembled data formats such as fentanyl, opioid and suicides, typically requested by the media. In order to access the portal please follow this link to the statistics page. Excerpts from the free death records data confirms investigation of twice as many unexpected, sudden deaths of males over females. Within the two decades The San Diego Medical Examiner’s Office investigated over 59,400 deaths. The portal confirms that men and boys accounted for 68% of the data while only 31% involved girls and women. In approximately 225 cases the gender either not released or unknown.

Records also confirm January sees the most cases and October and November being least common. Average age is 54 and women, on average, 59 and men at around 51. Accidental deaths accounted for 42%, around 4% for homicides and death by natural causes came out over 37%. The Medical Examiner also investigated over 8,000 suicides of which 200 happened on Coronado Bridge. Deaths noted as “undetermined” or “other” totalled around 1000. Opioids were responsible for 10% of deaths. The pre requisites to hold office across jurisdictions vary widely. Within the States there is a mix of medical examiner and coroner systems. Colonists introduced the concept (coroners) from England and is based on English law.