Over the past 5 years Shaun A Reid has found himself embroiled in forged death records, reprimands, investigations. Together with fines culminating in the closure of his business/es. Reid has traded under Shaun A Reid Funeral Services & Memorial Chapel (Washington) and Reid Funeral Home (Dumfries, Virginia) and owes $24,000 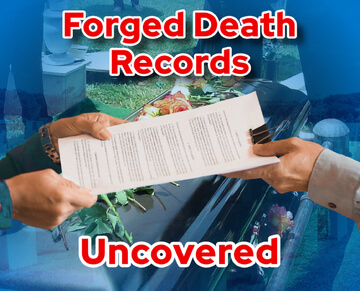 after he was discovered to be operating without proper credentials by the Department of Consumer and Regulatory Affairs. The correct embalming criteria together with resident’s concerns over use of ‘office space’. This despite a certificate of occupancy (September 2015) specifying “No services on site”. Reid appears to have misinterpreted this to mean no ‘large crowds’ on the property. Thereafter confirmed he was carrying on his business following approval by the Virginia Board of Funeral Directors and Embalmers.

However a town inspector and a state investigator, following a review, confirmed evidence of bodies receiving attention in the disputed ‘space’. A cease and desist letter followed from Dumfries following the discovery of embalming fluid and plastic bags. Within 2 months the certificate of occupancy was nullified while also citing public safety. Reid’s business license while initially suspended for 30 days has now expired. Any further re application is subject to approval by the town. He had attempted to sue Dumfries officials around defamation and false allegations. The forged death records relate to his activity in Maryland and the ban in 2014. A guilty plea on April 12 saw 2 years’ probation (Prince George’s County Circuit Court). Asides from the forged death records what prevails is there appears to be those who are at a low ebb, vulnerable and grieving have been taken advantage of.

The court records confirm a relative had problems securing a death certificate following his mother’s death in December 2016. The son therefore decided to turn detective and discovered his mother’s cremation didn’t take place until July 2017. Concerns were raised due to the fact that Reid had given the mother’s remains to the family 3 months prior (to her cremation). Prosecutors stated a forged doctor’s signature complemented the forged death records. Reid also pleaded guilty (2 of 7 charges) following one families receipt of a stranger’s ashes purporting to be their own relatives. Another case follows a complaint to The Virginia Department of Health Professionals and relates to a payment of $5000. Following the complainant receiving his wife’s ashes in a cardboard box as opposed to the urn he had paid for. Complaints were made prior against Reid in 2017 to the D.C. Board of Funeral Directors.

A number of Reid’s clients worry whether the ashes they received are genuinely those of their loved ones. Typically costs paid over to Reid varied from $4,000 upwards (“to fit every budget”). Typically blaming processes that were out of his control. Such as being unable to cremate a body without the approval of a medical examiner. A further excuse followed a warrant against a dead woman and when her son tried to clear the matter with the authorities he found he had no death certificate. Reid blamed Maryland Vital Statistics Administration for the delay.  His license suspended 3 days after The Virginia Board of Funeral Directors and Embalmers held a formal hearing (April 16). The Maryland State Board of Morticians and Funeral Directors in 2014 discovered Reid also failed to clarify to a family that he did not hold a license to ‘practice mortuary science’ in Maryland.

Reid signed a consent order resolving the action brought by the board and agreed a $1000 fine in lieu of charges via court or otherwise. Furthermore banned from ‘practicing mortuary science’ and directed to undertake an ethics course. There has been no confirmation as to whether both these directives have been fulfilled.