An elder caregiver in Boise, Idaho found guilty for the abuse of an elderly couple. 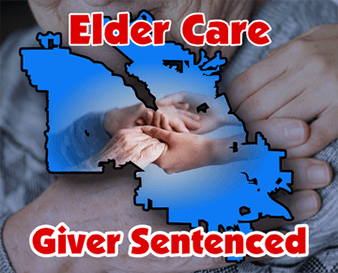 The arrest of Sherri Watring (53) was made in January 2019 and charges were of 2 felony counts, that being abuse and neglect of a vulnerable adult. The elder care giver also charged with exploitation in excess of $1000. Subsequently a further misdemeanour charge of petit theft. The unfolding story of elder abuse is not uncommon and details gaining trust over a number of years (approx. 7 years). while she was providing elder care and Watring then obtaining power of attorney in 2016. Unbeknown to the family Watring had the male victim, who died February 1st 2018, cremated. The male was a decorated World War 2 veteran.

She then scattered the ashes, without the family’s knowledge, in an unknown location. Following discovery of her actions she was fired by the family. A relative of the deceased had attempted to meet up with the accused in order to establish how he died. The relative was in regular contact with the deceased (Robert Chagas) up until 2011. It was not until October 2016 the relative became aware of her brother in law’s death. The relative the only contact on file noted how emaciated her brother in law appeared. How effective is the long term care background check

The female who died in hospice care in June 2018. Watring found guilty of neglect and abuse in respect of a failure for provision of adequate nutrition. Charged with performing improper medical treatments, this improper treatment likely to produce great bodily harm. The crimes committed between 2016 and 2018. As for the theft Watring used bank wires to transfer the money to her account from victim accounts. She also misappropriated debt to the elderly couple by abusing her position as power of attorney. The three day trial returned guilty on all charges. The sentence of 18 months shy of the 10 year term (2 years fixed) requested by ACPO. An unconfirmed Twitter account of a ‘Sherri Watring’ remains active.

In another case an elder care giver in San Diego has pleaded guilty. Charges of perjury by false information, imprisonment of an elder and voluntary manslaughter. Prior to this plea she faced kidnapping for ransom, 1st degree murder and harm or death of an elderly/dependent adult. Another elderly patient found starved and beaten in an apartment of Montana. The elderly female allegedly held captive for 11 years. However this may have been upwards towards 23 years, the elderly female weighed 81lbs. Montana was already convicted over a third patient and sentenced to a year this along with a 13 year sentence. The sentence handed down on March 6th.