Missouri’s elder abuse hotline has numerous concerned callers but the department has only been able to answer half the  calls. The hotline also serves residents with disabilities (18-59) and those 60 years and over, 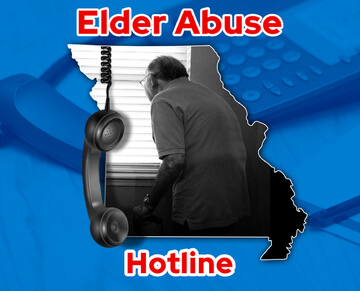 reports on neglect, abuse and exploitation documented. Last year saw over 17,000 calls lost following a recorded message while a further 10,000 calls dropped and/or hung up prior to being answered. Other reasons put forward as either unknown, poor mobile reception or staff error. A joint investigation by The Columbia Missourian and the KBIA confirms around half of the 92,000 calls to the elder abuse hotline went unanswered. While from January to April of this year around 39% went unanswered.

The Missouri Department of Health and Senior Services admitted numbers weren’t encouraging. The past ten years has seen a 35% increase in exploitation and abuse. While over this period one call handler joined the elder abuse hotline. The hotline’s site reports concerning instances of caller’s detail. Including an elder in a roach infested home and a son who severely beat his 70 year old mother. However while these figures may not fill Missourians with confidence it’s worth remembering that Missouri is one of only 18 States that currently offer online reporting of elder abuse. Those tasked with call handling are 2 part time and 18 full time staff. The surge in reporting to the department is attributed to awareness of The Elder Abuse Hotline (Jefferson City) and an increasing elderly population. Missouri is not the only State as recently reported in respect of the backlog in Minnesota.

Elder abuse hotline issues realised late on in 2018 by The Division of Senior and Disability Services. At any one time 4 people can be on hold, any additional calls may drop. Average hold time was around eight minutes (January to April 2019) but some have waited over an hour for contact. The longest call duration in February at 1 hour 22 minutes. The Division of Senior and Disability Services became aware of issues from complaints. However data they had to work with did not correlate with those complaints. The data obtained from Unified Communications, data prior to 2018 did not detail disconnected calls giving an inaccurate picture. The department has worked together with Unified Communications to ensure they are in charge of more detailed and specific data.

The hotline is open daily from 7am through to midnight but unanswered calls (after line closes) are not tracked. The bureau has advised care providers and law enforcement (mandated reporters) to fax reports if no available call handlers. This method of reporting accounts for around 1200 reports in 2019 however the call response rate has not improved. The concerns remain that if callers do not persist the vulnerable remain at risk. Furthermore a fax facility is not always readily available to an abuse victim. Lack of funding restricts an online submission form while the department tries to streamline the current process and a grant has been applied for. They are also referring to other States operations to fine tune. Prior to a request for funding of additional workers the bureau is addressing hotline inefficiencies. Essentially to reduce time spent writing up cases to spend more time answering calls.

Staff turnover has also decreased owing to workers telecommuting during “undesirable shifts”. The current State budget does not make provisions for additional funding for the hotline. However if the immediate issue can not be overcome the option of requesting additional future funding is available. The budget committee this Summer will note the integrity of any forthcoming or revised data.