A number of approved bills will encourage eligibility for DUI expungement in Michigan. Those with first time drink drive convictions can now clear their record. Thereafter automatic expungement of 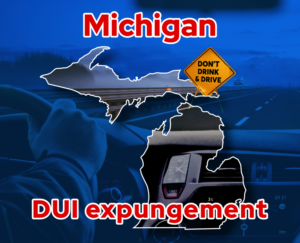 a juvenile offence may follow. This follows sweeping changes brought in by Gov. Whitmer. Earlier legislation excludes those who, due to an old driving offense, experience discrimination be it employment or . Silly mistakes due to the impetuous nature of youth should not blight an individual in to adulthood. Those with a DUI record should be a part of the wider movement currently to expunge criminal records. The legislation effective April though would not legislate for subsequent drink drive offenses or where injury or death occurs. The automatic process will not clear Operating while Intoxicated. An individual will have to file an application in order for a judge to grant the DUI expungement.

The application waiting period for application will begin in April. The period ranges from three to seven years after monitoring ends. However this depends on the type of conviction and law enforcement will retain access to expunged records. According to a recent audit in 2019 there were over 31,000 drink or drug driving convictions. A  Safe and Just Michigan spokesperson saw it as reasonable a DUI expungement should apply to an historic past conviction. Adding that people need participation and access to the community and economy. However the bill was opposed by The Prosecuting Attorneys Association of Michigan. Together with the Michigan Association of Chiefs of Police and the Michigan Sheriffs’ Association. The concern being parity between  juvenile court records and adult criminal records. The legislation and process favors those who stay out of trouble and their court record (certain offenses) sealed from public access.

Current criteria was those with juvenile records had to wait till they were 18 to apply for an expungement.