Two legislative measures (AB1076 and AB1331) concerning California criminal records argue for restoration of rights for ex prisoners. Those released often find that re acclimatising to society and overcoming the obstacles of re integration are a further sentence in itself. The Democrat initiative, if successful, could see upwards to 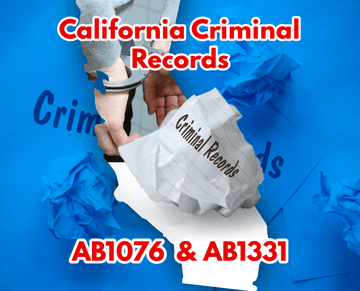 eight million Californian residents enjoy a clean slate. This legislation follows the 2016 vote (effective January 1st 2018) to de criminalize the use of marijuana (recreational use) dating back to 1975 in California State, the expungement of further qualifying eligible convictions is now sought (under existing laws), the attorney general is already required to identify offenders by July 1st. The qualifying California criminal records and/or offenses being non-violent and misdemeanor cases along with those finishing court appointed sentences.

The AB1076 will address automatic expungement of records while AB1331 will tackle glitches that appear to affect criminal record databases. Thereafter public court records access by name search within the State should only return relevant and up to date information. The expungement of records will also help ease the passage for police clearance in California. Around 20% of residents in California have a criminal history restricting their access to housing, employment and education. While also affecting the immediate family. The legislation was also backed up by a march in Sacramento comprising community leaders, elected officials and protesters (last Tuesday) from 9 different counties and spearheaded by #TimeDone. The bill will also compel the attorney general to expunge automatically. As opposed to ex prisoners having to go through the process of expungement.

However those responsible for the implementation (The California Law Enforcement Association of Records Supervisors, Inc. (Department of Justice)) are wary of costs. Any succesful legislation warn that costs could spiral upwards to tens of millions and would require weekly maintenance. They further argue that those eligible ex prisoners can petition themselves for expungement of their records. The Law Enforcement Association see it as a burden on over stretched and short staffed California Criminal Records personnel. Moving these open records to an automated system is very labor intensive and cost prohibitive. However executive director of Californians for Safety and Justice, Jay Jordan, sees cost offset by economic benefit. Former prisoners securing employment and (as law makers advise) the expedition of California criminal records by way of technology.

Some of the far reaching impositions to every day are widespread. Including being unable to adopt and being unable to sell used cars or real estate. Also deprived of involvement in a child’s school activities. Neither applying to join the PTA and neither being able to chaperone your child on school field trips. The District Attorney for San Luis Obispo sees existing law of power as contradictory. The DA contends that what we have to bear in mind is that the courts are a branch of the judiciary while the DoJ is an executive branch. Is there a cross over in that the DoJ take on something that is within the remit of the court versus separation of power.
Expungement forms California