The new California ammo background check bill is now effective which makes California the first U.S. State to impose a more stringent process at point of sale. Whether this prompts other States to follow suit remains to be seen. 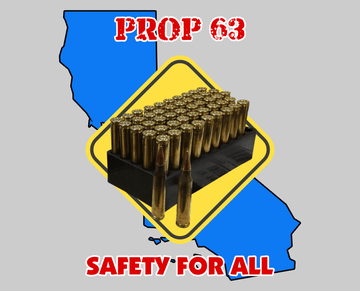 In 2016 California voters voted overwhelmingly to approve the measures and requirements that those suffering from mental illness, a history of domestic violence, felons and/or have a warrant or conviction for a violent misdemeanor should not have access to ammunition. Under The new bill vendors may only conduct ammo sales in face to face transactions and subject to ID verification and a background check by the office of the California Department of Justice. Prior to the California ammo background check bill anyone (over 18 years) could purchase ammo online, by post or stores.

The cost of background checks vary from $1 upwards to around $20. Checks can take a couple of minutes or a few days, this also applies to online sales. Sales are shipped to a licensed reseller and customers must collect in person, applies also to out of state sales. The new law seeks to stem gun violence which took over 3,000 Californian lives in 2017 (Centers for Disease Control). However gun advocates (NRA) claim this is unconstitutional and is affecting law abiding citizens who wish to buy ammo along with second amendment rights. The California ammo background check bill is underpinned by THE SAFETY FOR ALL ACT OF 2016 ( Prop 63-Safety for all details ) which was introduced following the murders of 14 people at a San Benardino social services center in December 2015 while also injuring several others.

San Diego gun owners have filed a lawsuit in the U.S. District Court. This an attempt to overturn the bill citing an ‘intrusion’ along with a law banning gun sales to under 21’s. Should the new law survive the initial legal onslaught the California ammo background check bill may well be seen as a turning point in reducing gun violence. Irrespective of these robust measures in 2017 3,184 people died in California (gun-related) at a rate of 7.9 this was below the U.S. average of 12. California has effectively reduced it’s gun mortality rate by 60% over the last twenty years. However the stats remain sobering in that an average day in 2014 witnessed 314 Americans killed or seriously injured. Moreover almost 115,000 children, men and women shot in the same year with more than 8,800 prior to reaching 18 years old. In the decade prior a million Americans shot.

Some vendors claim this kills business and that the new restrictions blights tourism. The hunters from out of state buy a non-residential hunting license but then can’t go hunting. In the majority of cases ammo can not transfer in from out of State. Non residents now require a certificate of eligibility. The bill also eliminates several exemptions in respect of a large-capacity magazines ban (pending litigation/State appeal) and has increased penalties for possession. The exemption previously allowed owners (high capacity magazines) prior to 2000 (ownership) to retain this accessory. Is California’s bill unique? There are 4 other States (Illinois, Connecticut, New Jersey and Massachusetts) requiring an individual to obtain a license or a permit. Following a background check allowing the purchase of ammunition but for a certain period of time.

The move defended by the Democratic Governor as an effective tool to advance public safety. A recent study by the John Hopkins Center in June concluded background checks do not, in themselves, decrease lethal gun violence. The report concluded that the only effective way to screen prospective gun owners was to establish a licensing program, which could be implemented in conjunction with expanded background checks. The study also referred to gun owner requirements in the State of Connecticut since 1995 to obtain a license. Notably there was a 40% reduction in gun homicides along with a 15% drop in gun related suicides.