The number of Pennsylvania gun background checks almost doubled in the last quarter. This increase set against the same quarter from 2019. The increase tied to the pandemic and social unrest. 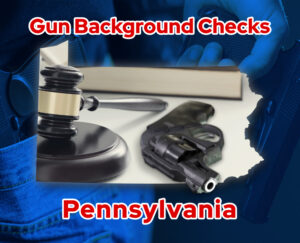 The increase in PICS (Pennsylvania Instant Check System) activity was seen in the first quarter with awareness of COVID-19. However this trend has continued unabated towards record numbers. The Instant Check System commenced in 1998 and July to September 2020 its busiest quarter. The number of completed Pennsylvania gun background checks surging to 406,151. For the same period in 2019 a background check was ran on 225,214 applicants. The FBI also ran over 3.6 million gun background checks in July. These numbers noted as the third highest since records began. In the corresponding month of 2019 around two million checks were ran. The highest volume day in the third quarter 2020 was July 23rd with 7,120 PICS checks.

However not everyone is enamoured by the numbers. Philadelphia Council leaders together with the mayor have filed a  lawsuit against the Commonwealth of Pennsylvania. The lawsuit seeks to address Pennsylvania’s Preemption Laws and enforcement of gun control and safety measures. Other plaintiffs joining the mayor are CeasefirePA (reform advocacy group) and families of the victims of gun violence. The lawsuit claims Pennsylvania’s preemption laws block local government remedies and safety measures to gun violence. The preemption laws allow the commonwealth absolute regulatory power over localities and local government. Consequently the preemption laws have been the focus of much legal wrangling over the years. The volume of Pennsylvania gun background checks would appear to correlate with mortality rates as a result of the trigger. In 2010 there was one death every seven hours or 1,307 deaths in total.

In the first decade of the millennium Pennsylvania was the fourth most deadly of 50 States with 12,941 gun deaths. It is also a fact that weak gun laws present a haven for gun trafficking and illegal arms. Pennsylvania sees around 1,600 gun deaths per year, higher than deaths by car accidents. In 2015 firearms deaths totalled 1485, suicides accounted for 932 deaths and 533 homicides. This year has seen an overwhelming increase in homicides and shootings. The mayor of  Philadelphia, two years ago, declared the gun violence a public health emergency. Current homicides are up 40% on this time last year. A “Safe Havens Law” passed by the city council last year fell flat due to State level inaction. Other efforts such as one gun a month limit and licensing have also been barred from enforcement.